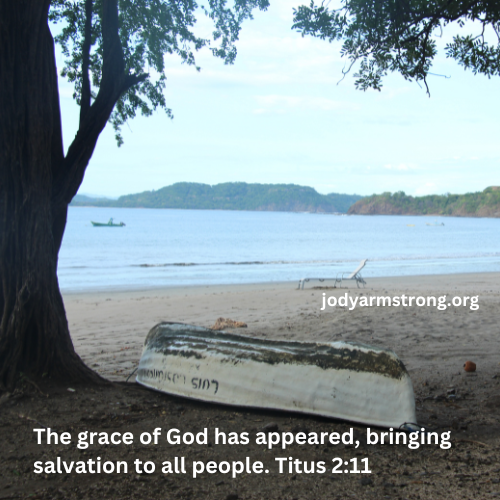 What I am saying is that as long as an heir is underage, he is no different from a slave, although he owns the whole estate. The heir is subject to guardians and trustees until the time set by his father. So also, when we were underage, we were in slavery under the elemental spiritual forces of the world. But when the set time had fully come, God sent his son, born of a woman, born under the law, to redeem those under the law, that we might receive adoption to sonship. (Galatians 4:1-5)
Middle School is usually the most difficult time of our childhoods. We were not only under the laws of our parents and schools, but we were also slaves to peer pressure. We looked forward to becoming adults because the rules seemed easier.
Before Jesus, all God’s children remained underage without hope of following a simpler set of laws. “For this is the reason the Gospel was proclaimed even to the dead, so that, though they had been judged in the flesh as everyone is judged, they might live in the spirit as God does.” (1 Peter 4:6)
Who preached the Gospel to the dead?
Ephesians 4:8-9 tells us, “When He (Christ) ascended on High, He led captive a host of captives, and He gave gifts to men. (Now this expression, ‘He ascended,’ what does it mean except that He also descended into the lower parts of the earth?”)
Jesus went to Hades and preached the Gospel to the dead. He took captive spirits, many of whom were under the law, to heaven at that set time. God also sent Jesus so we could receive adoption to sonship.
God gives grace to both the dead and the living through Jesus. If we believe that Jesus saves, we should not live in slavery to the Laws of Moses or the unspoken laws of our peers.
Father, I praise you because your gift of grace is for everyone. Let the lost receive it. Help me to love you, myself, and others because that is the law that will set me free. In Jesus’ name, I pray. Amen.

SOAP Devotion Galatians 4:1-3 – Are you a slave or a child of God? – Free online Bible study – Commentary in easy English – Day 733